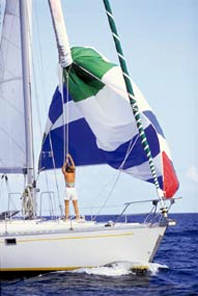 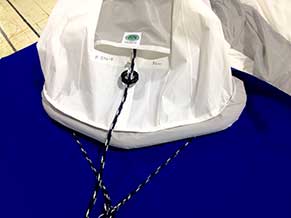 That statement is particularly true regarding the spinnaker. The problem is not to hoist the sail but to get it back on the boat. That's when the spinnaker sleeve makes the average sailboat owner a great sailor. Without any help, he makes that very powerful and expensive sail disappear with a minimum of fuss and trauma. And the sail is ready to be hoisted again immediately, no more packing!

While it would seem that a spinnaker sleeve is a simple sailing tool, and that any one with a sewing machine could design and fabricate one, when dealing with large sails, the problems increase rapidly in complexity and cost. It is very plausible to get hurt or to inflict great injury to others, and to one's wallet, if the system used is inadequate. But there is no need to rub it in, especially at sea: it has to work and be reliable.

The main problem to solve was the mixing of the control lines and the sail. 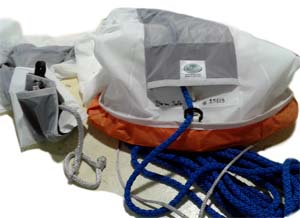 A separate channel (which contains the control line) is sewn alongside the main sleeve which contains the spinnaker. The spinnaker and the control line are completely separated . The separate channel (side sleeve) is made of a different colored cloth than the main sleeve which shows the eventual twists of the sleeve prior of hoisting it. There will often be some twists in the sleeved spinnaker as it comes out of the bag, especially after long periods of storing and moving it around the sail locker. Needless to say, those twists are to be removed before hoisting the sleeve.

Another problem to address was the opening, the mouth of the sleeve.

It had to be rigid to remain open when pulled against the sail, slippery to enable it to slide over the sail without chafing it, light (weight aloft should always be avoided) and sturdy enough not to break in the bag when stepped on or stored. Canvas is the material of choice by its versatility and ease of manufacturing. While the round shape seems obvious, the oval shape is more spinnaker friendly for it doesn't have the tendency to rotate around the sail as it is guided by the spinnaker leeches and it is easier to slide through the hatch when storing below deck. We make them out of canvas which offers a good combination of strength and lightness.

The control line is a closed loop, made of 2 different lines. One side is to hoist the sleeve. It must not kink and it should be small enough to travel in the side sleeve and through the top turning block. The other side must be much heavier as it is handled by the operator to douse the sail. It also must not kink as well as be long enough to be lead through a snatch-block, as Steve Dashew suggests in his very thorough 'Offshore Cruising Encyclopedia', in the fore deck and then to a cleat or a winch on bigger boats. 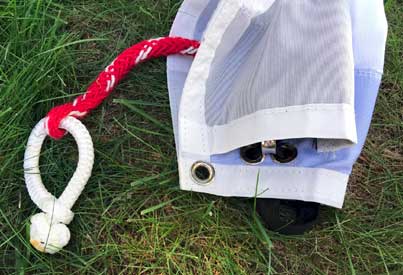 The cloth problem came from the fact that spinnaker or bag cloth doesn't breathe and might bleed.

The cloth that is milled especially for ATN is a 'tricot', a mesh like material which is light, strong, and doesn't retain water. The sail can dry when in the sleeve and it will not cling to the sail when hoisting the sleeve, even after long period of wet storing.

The hoisted Spinnaker Sleeve must always remain in the same position at the mast head, on top of the flying spinnaker, while allowing the spinnaker to rotate under itself. This also gives more flexibility when loading the sail.

The head of the spinnaker is fastened to the boat using a soft pennant to prevent corrosion and simpler operation.


ATN now offers a SnapRatchet block to facilitate the dousing of the ATN spinnaker sleeve. The advantages of using the ATN SnapRatchet are threefold: 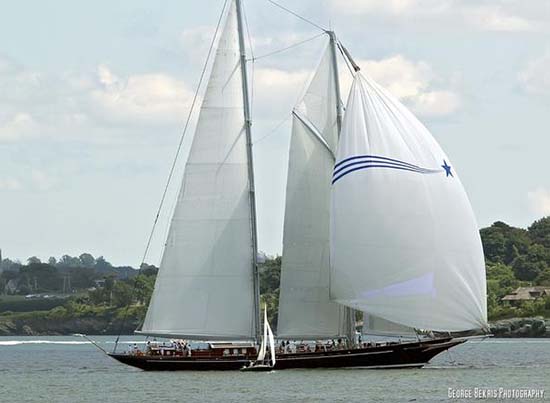 Deliverying an ATN Spinnaker Sleeve to Loick Peyron, on his 40'
Walter Greene "Happy", getting ready for the upcoming "Route du Rhum". 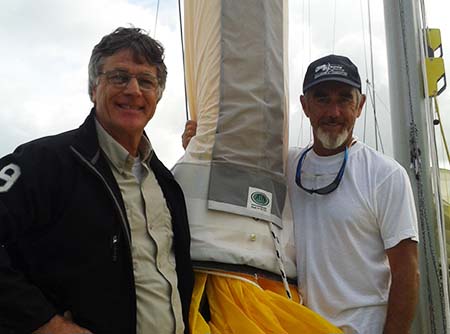 Ten years ago we first tried an ATN spinnaker sock on our 67' Sundeer. The result was extraordinary. The ATN system worked well enough for 2 of us to use our spinnaker more often than not on downwind passages. Today my wife Linda and I still use the ATN sock on our 78' Beowulf, and recommend it to all our clients. There simply is not a better way to handle a spinnaker.

Best Sails for Sailing Around the World
Neil Pryde's Bob Pattison weighs in on what sail inventory will get you around the world safely.
by Bob Pattison
"The Passport is trickier; as the large furling and self-tacking jib will be difficult to make heavy enough and not alter its all-around performance and importantly, with the athwartship track, it will be difficult to have it sheet correctly when furled to a storm jib size. In this case we would look to alternative storm jib options such as the ATN Gale Sail ... The system works in concert with the furled headsail, allowing the user to hoist a somewhat independent storm jib without having to take the furled genoa down."

The last auxiliary sail on the list would be a cruising asymmetric spinnaker. Most are familiar with these now and how they are flown and used. Sailing lower angles in the trades and in light air sailing in general they can't be beat for boat speed improvement. Design evolution over the years has led us to a sail that can be effective at wind angles of 50-170 degrees and even sail at 180 when wing and wing. Sailing angles for the asymmetric dictated by wind strength… in other words sailing at 55 degrees in 6 knots of breeze is impossible but not in 12 knots of breeze and conversely you won't sail low angles in light air.

In recent years there have been developments with furling systems of various types. (top down, auxiliary line, and inline systems) After significant use and testing of the different types, we would still recommend the now traditional "dousing sock" approach to asymmetric sail handling. For offshore work most will find the sock less cumbersome, lighter and they take up less space. The handling of both the sock and furling systems are similar in terms of setting up and taking down, they differ in the actual "dousing" technique, one furling and one being "doused" by the sock. The furling system actually requires more physical effort than socks which come down will relative ease when the spinnaker is collapsed. The furling systems require much more physical effort to spin either the sail/torque rope combination or the external top down torque rope systems.

Regardless of system, the sails are a must and if there is a word of caution to be mentioned I always remind sailors how big and powerful these sails are and as such the following three rules should be followed:
1.) Know if the wind is building. Take down early and go to your conventional sails to be safe
2.) Always have 3 or more wraps of the spinnaker sheet on the winch. These sails can exert tremendous forces on the sheets should the sail collapse and fill as happens during a gybe. Keep your fingers!
3.) In passagemaking do not be tempted to fly the spinnakers at night unless you have a full crew and are very aware of the weather. Bad things happen at night and they are difficult to deal with in the dark, making it unsafe for all.


I have known Etienne Giroire of ATN for over thirty years. Not only is he a great sailor, he has invented some great products to make sailing more enjoyable and safe. I bought two items from him before my wife and I set sail to do a circumnavigation in our 52 ft. ketch Lolita in 1999. The ATN Gale Sail (storm jib) was used often, in survival storms to just average trade winds of 30 to 35 knots for days at a time. Easy and safe, it is a must on any yacht. The ATN Spinnaker Sleeve made using a Spinnaker easy and fun. I know I would not have even taken the spinnaker along without his sleeve. I am in the process of retiring again from selling yachts and setting sail on my new yacht (48 Amel Ketch) to the South Pacific and I'm buying both the spinnaker sleeve and the Gale Sail from my friend ATN.

See the ATN Spinnaker Sleeve on the 1930 J Boat "Shamrock V" under way.